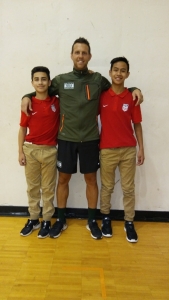 This past November three Soccer Field Academy Alumni, Nico Briones, Anthony Hernandez, and Elton Chifamba were selected to take part in the prestigious U.S. Soccer Federation Academy training camp in Carson, California. All three represented the u14 (born 2003) age group, and had trained with head coach/SFA owner James Field in various roles since an early age.

Nico began training with James at the u7 level, with Anthony and Elton joining two years later at the u9 level. Working with them day in and day out for years James helped guide their development, taking a “building blocks” approach to expanding their skills and thought processes. Training upwards five times a week, the rapport not only influenced their on the field demeanor, but also their habits and work ethic off the pitch as well.

“James’ fingerprints are all over their development.” Said Jay Briones, Nico’s father. “The focus from a very young age was on developing the mental side of the game as well as physical, working on their soccer IQ. That’s served them so well, even with the Youth National Camp.”

The three spent November 13-20 in Carson, California, as part of the 48 player camp, working under coach Clint Peay. They received training and instruction, and took part in intra-squad scrimmages as well as games against outside opponents.

Briones, Chifamba, and Hernandez are the three latest SFA Alumni to take part in National Team camps, and coach Field was incredibly proud of his students.

“Seeing the hard work they’ve put in, day in and day out, over the years pay off, it just makes me so excited for them. It’s not just their skills, but their work ethic that has taken them this far. I’m very proud of them, and very very excited to see their development continue in the future.”

The years spent training under James have left a long lasting impression with young Nico, according to his father Jay:

“Nico wouldn’t be at the level he is at without James, the attitude and culture he instilled in the boys. It was never all about winning, but about developing the players.” He said. “James will always be Nico’s mentor.”

James, for his part, is honored.to see his tutelage leading to success for his students.

“It’s gratifying to see that all the time I spent with them has helped instill those values that we hold at the SFA. I’m very proud that they’re out there, representing what we do so well.”

​For more information on SFA programs, including enrollment questions contact [email protected], and stay tuned to soccerfieldacademy.com for updates.