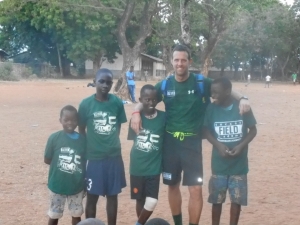 James checked back in with his second update from Africa!

“I woke up early this morning, and met with Ben Levey to discuss the strategy for the 1st round of evening training sessions. In preparation for the session we met at the LCFL office to discuss the logistics of the session for the evening. I met with Abbas (LCFL secretary) and Hamisi a young up and coming youth coach for the LCFL to discuss the content of the session and how we would deliver and execute the session effectively. Hamisi played in the LCFL when it first started in 2011 and he shared with me how it has impacted his life and his younger brothers life so positively during the past few years.

At 2:30pm we left the LCFL office, and walked through the streets of Likoni with 28 balls, 80 bibs and 200 cones. The 30min walk is a regular journey that the LCFL coaches take everyday to the fields. We arrived at the Likoni secondary school and began to set-up, one hour ahead of time, and try to “wow” the kids and coaches before they arrived with an organized field and pumped up balls. The purpose of tonight’s session was to have my first interaction with the players, and create an opportunity for coaches to observe the session and implement some of the ideas and concepts into their own training sessions.

All of the young boys (approx 50 players total) traveled to the fields directly, after school ended at 3:00pm by foot (some up to 30-mins away). Most of the players do not have cleats, so they remove their sandals and play barefoot. As the kids arrived, I greeted them in “Swahili” with the word “Mambo” which means “How are you doing?” and the normal response back from the kids is “Poa”, which means “cool”.

We decided that I would work with a group of twelve U12 aged players and for the coaches to observe my session and try to mirror the exercises and the concepts (with the help of their assistant coaches). During the session the kids seemed nervous to be coached by a “Mzumgu” which translates to “white man”. It was at times difficult to communicate with the players, as not all spoke English very well. So I used a player named Saidi to assist me with communicating to the other players in Swahili. As the session progressed from exercise to exercise, the players became more comfortable and we seemed to make real progress. Most of the players are very talented individually with the ball, although they have a very limited understanding of the game, positioning and awareness.

At the conclusion of the training session we brought all of the kids together for a debrief and to hand out some SFA t-shirts for the most improved players during the session and to also hand out candy to every player. By the look on their faces, many of them had not eaten candy in a long while. We had to end the sessions at 6:15pm sharp, and before it started to turn dark in order for the kids to return home safely (they all walked).

After a long day out in the sun, I returned home on a piki-piki (a motorbike taxi) to a couple of Kenyan Beers (Tusker) and I am excited for tomorrows events, which will include a coaches meeting at the office in the morning and a coaching session in the afternoon.”

Check back regularly for more dispatches from James!

Dispatch from Likoni #1
Scroll to top