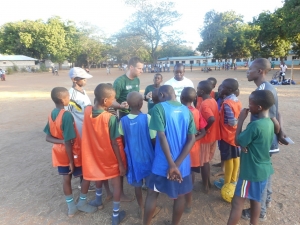 Day 3
The morning began with me attending the weekly LCFL coaches meeting at 10:00am (although we didn’t start the meeting until 11:00am), (I am beginning to learn that “African Time” is very different to the rest of the world, it’s much more laid back here.) This meeting is also the annual get together of the founder of the non-profit program, Ben Levey and the LCFL management team. We discussed many topics ranging from best practices, to improving the day to day operations of the program, and ways to better serve the kids that participate. One of the main take away’s from the meeting’s was establishing an elite standard for each club to attempt to get too. At the end of the meeting, I was able to distribute many items of coaching apparel that I had accumulated during the past few years that I was an Academy Coach with the Columbus Crew. The coaching staff were very appreciative… and they looked great!

After the meeting, myself and few of the coaches went for lunch together down the street. We ate Ugali (The Kenyan Carb), Mchicha (Spinach) and Nyama (Beef) and water to drink. The coaches love to talk about football, and especially the English premier league and specifically about Arsenal (whom most Kenyan’s support). We had some very interesting conversations!

Following the meeting we attended training at the Likoni secondary school. As we approached the school, what seemed like a couple of hundred school kids were laughing and giggling at the sight of two approaching “Wazungu” (White Men). As we entered the school grounds, the kids surrounded us, and wanted to shake our hands and play with our hair. They followed us, to the area in which we play, laughing, giggling and dancing. We were eventually scolded by the teachers, for disrupting their recess program.

The training session with the kids was amazing! Their work ethic and their desire to learn is enthralling. The players were again anxious at first and as the session progresses they seem to let their guard down and we are having dialogue back and forth. “Should we have a big attacking shape or a small attacking shape?” I would say. Their response is “A big shape coach, a big shape is better for us!” The session began with this over-anxious kids, running 100kph like headless chickens, and the session finished with them playing with more composure and thought in their decisions!

Day 4
Myself & Ben met with Hamisi, whom is one of the local coaches and he agreed to show us around the city of Mombasa. It requires us to cross the channel from Likoni to Mombasa town. Hundreds of thousands of people use this ferry each day to work inside the city of Mombasa. Two to four double-ended ferries alternate across the harbor, carrying both road and foot traffic. We visited the famous Mombasa Ivory Towers, we walked through one of the many gardens (which housed thousands of bats in the trees) and enjoyed an avocado and passion fruit juice drink. Then we made our way to Fort Jesus. Fort Jesus was the only fort maintained by the Portuguese on the Swahili Coast, and is recognized as a testament to the first successful attempt by a Western power to establish influence over the Indian Ocean trade. We walked through the Old town of Mombasa, which was dominated by mosques, as a large percentage of the population is Muslim. The final highlight was the market in Old Town, in which I saw lambs head (still with beady eyes and a fur skin) and Camels meat (with hooves and fur also intact)!

Training was unbelievable! The kids arrived early and wearing their Soccer Field Academy T-shirts (I think some of the player may have slept in them.) Each and every child came up and shook my hand prior to removing their sandals and preparing to play. Word had gotten around that Myself and Ben were in town, as double the number of kids arrived to have an opportunity to participate in the training sessions this evening. We carried on from last night’s sessions and working towards playing with more patience on the ball and playing more side to side, rather than direct with no purpose. At the conclusion of the session, we handed out candy to every player whom was there, 80+ and SFA T-shirts to the players whom stood out from the rest!

It so far has been such a humbling experience, I cant wait for the next interaction with the kids.

Dispatch from Likoni #2
Scroll to top