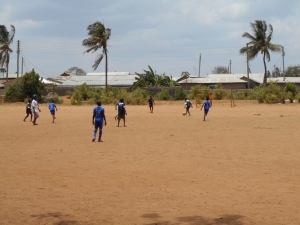 Our own James Field is currently in Likoni, Kenya, imparting his years of soccer wisdom to the Likoni Community Football League and its coaches and players. Throughout his trip he will be sending home some dispatches, which will be shared here.

The day started early after an exhausting two days of travel to Likoni, Kenya. Morning began with coffee and the company of some hungry monkeys that we kept at arms distance with whistles and some yells. They had a keen interest in joining us for breakfast.
‘
We both hopped onto a motorcycle, known here as a “piki-piki”, their form of a taxi with a driver that took us to Likoni secondary school where the LCFL games were taking place. We arrived to watch the U12s play. The match was interrupted for 5-mins as the coaches cleared the cows, whom had wandered onto the fields.

I was astounded that they didn’t play with any boundaries, though the players, coaches and referees were well aware of when the ball was out of play. A majority of the kids did not wear soccer cleats and instead played in their bare feet. when we spoke to the coaches they informed us that their was simply a lack of shoes available for the kids.
‘
Following the U14 matches, we decided to go with “Abbas”, the LCFL secretary for something to eat at his favorite local restaurant. When I say restaurant you’re probably picturing something like we have back home, a fancy building with nice tables, chairs, and a large menu. That was not the case. It instead consisted of a couple, whom were serving limited food options from their house. On our 25-min walk through the Likoni neighborhoods it was extremely hard to see the horrific living conditions of the people of Likoni. One thing that stood out for me above all else was the amount of trash that was left in front of the residents houses and on the streets. Apparently it is periodically scoped up by the private owner of the land or property and then burned together with other trash and then left in that same pile. There seems to be no reliable city refuse collection.

Today happened to be the day that the local senior teams were playing in their final tournament game. It was organized and funded by a local politician in an effort to be in the front of people’s minds as the election approached. The match consisted of 2,000 people whom all came together to cheer on one of the local teams. Every time one of the teams scored, the fans invaded the pitch and officials had to escort them off the field again.

Tomorrow, I will be running a coaches education session for all of the local soccer coaches within the community of Likoni.”

Check back soon for more updates from Kenya, and for information on how you can help contact James, or visit LCFL.org!