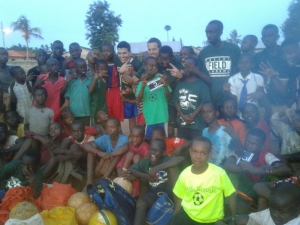 Today’s session was so amazing! I decided to organize a mini tournament for the boys. Each team represented a European team; Real Madrid, FC Barcelona, Arsenal (the most supported team in Kenya!), Man Utd, Man City, Chelsea, Liverpool, and Bayern Munich. The boys were divided into 12 teams of 5 players and we played 4v4 games in which if you won your 6-min game, you would proceed up the ladder to eventually play at the top field. Any draw was settled by a game of rock, paper, scissors, which was new to most of the boys. The talent on display was amazing! The kids are so gifted with the ball! It was amazing, seeing these kids playing on a dirt field, with no grass,  uneven, layered with rocks, plastic bottles, sticks, stones and goat poo. The kids do not care, they are so excited to play! The games were extremely competitive and fun to watch. The eventual winners were Real Madrid and were so happy to receive captain armbands as their prize for winning the tournament!

Unfortunately, I had run out of the candy yesterday that I brought from the US, so I found a small shack selling Oreo cookies, so I purchased as many 6-packs of Oreo cookies as I could for the kids at the end of the day, cleaning out the store. Dishearteningly , most kids are only receiving 1-2 meals per day, so an Oreo cookie is quite the treat. I handed out Oreo cookies and wristbands to each participating player in the tournament and captains arms bands and SFA T-shirts to the top 3 teams.

During the past few days, I have become quite attached to some of these kids (Juma, Abbas, Mohamed, Emmanuel, Siadi), it is hard to be leaving on Sunday, but not before watching their regular Sunday league games.

Dispatch from Likoni 4
Scroll to top