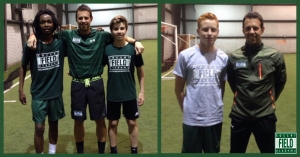 The Soccer Field Academy is proud to announce three of our 2003-born players, Dylan Kropp, Junior Lungu, and Bradley Leonard are taking part in Tottenham Hotspur’s five-day Player Development Residential Program. They earned the invitations by virtue of their outstanding performances at the 5th annual Tottenham Hotspur America Trophy tournament, held this past December in Baltimore, Maryland. They were rated as being three of the best sixteen players in the tournament, earning invitations to London to train at Tottenham Hotspur’s world-famous academy, which has produced players such as current England Internationals Danny Rose and Harry Kane.

​All three young players train with the SFA three to five times a week throughout the year, gaining valuable knowledge and experience from head SFA coach, James Field.

“I am extremely proud of all three boys. Fueled by their love of the game and relentless dedication to improving as players through countless hours of training have provided them with this amazing opportunity. I am so excited to see them be rewarded for their efforts.”

Coach Field has worked with Lungu for eight years, Kropp for three, and Leonard for the past year. Mabel Bequelman Kropp, Dylan’s mother, credits James and his guidance for the leaps her son has made.

“Without James he wouldn’t have gotten there.” She said. “Training with James has been the most amazing experience. All the hard work, both on and off the pitch, has made him a much better player. Every session there’s something new to work on, to improve on. It’s always a new challenge, and Dylan loves it.”

The players will arrive on Sunday, April 9th, and stay for a week, departing the following Sunday. While in London the players will receive world-class coaching, training sessions, and play matches. They will also get to experience London, including a tour of Tottenham’s home ground, the famous White Hart Lane.

“It’s really incredible, Dylan is counting down the days.” Said Mabel Kropp. “We owe it all to James and his training.”

For more info on SFA Programs, including enrollment, see the Academy Membership page at SoccerFieldAcademy.com